The Race to Market for Urban Air Mobility

The coronavirus pandemic may have cooled the hype, but it hasn’t dampened the enthusiasm in the nascent urban air mobility (UAM) sector. Testing of electric vertical-and-takeoff-and-landing (eVTOL) vehicles is picking up pace, and the first type certifications and commercial deliveries could start in less than three years. The race to be the first to market is heating up.

In the U.S., Joby Aviation is transitioning to a company focused less on development and more on certification, initial manufacturing and laying the groundwork for 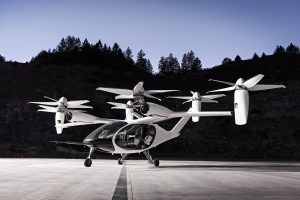 commercial operations of its pioneering air taxi design. In Germany, Volocopter, having recently completed successful demonstration flights of its “VoloCity” aircraft in

Helsinki and Singapore, has started  selling tickets for limited reservation flights to help fund continued development and certification. And in the U.K., Vertical Aerospace recently released its air taxi design called the VA-1X, which the company expects to certify and put into commercial operation by 2024

All of this momentum stands in sharp contrast to the commercial aviation sector, where airline passenger volume is down by more than half from last year. In the U.S., it’s about 70 percent of what it was in 2019, according to Washington, D.C.-based Airlines for America, the industry’s principal trade organization.

As if that weren’t bad enough, near-term prospects point to only modest improvements, and new Aviation Week Intelligence Network data suggests the demand for new aircraft production could be about 30 percent lower over the next 10 years than previously thought.

First-wave UAM companies moving through prototyping and certification are fleshing out business plans that are not all focused on inner-city transportation. Intercity flights, first responders, medical deliveries and unmanned logistics also are in the emerging market mix.

Joby is on track for certification in 2023. Designated the S4 for certification purposes, the yet-to-be-named air taxi is configured to carry four passengers and one pilot. It will be capable of operating day and night in instrument or visual flight rules up to 150 nautical miles. Driven by the goals safety, noise abatement and affordability, a Joby Aviation official said the design is about 100 times quieter than a helicopter.

The company has completed several hundred flights of its second-generation high-wing, six-propeller “2.0” version since 2019, including some with a pilot onboard. The aircraft features multiple redundancy in power and control surfaces.

Subscale S4 prototypes have been flown more than 700 times, starting in 2015. “The No. 1 priority is safety, and at a level you see in commercial aviation, which is the safest mode of travel we have,” CEO and Chief Engineer JoeBen Bevirt said.

For its part, Vertical Aerospace plans to forego subscale prototyping and proceed directly to full-scale production in order to meet its 2024 certification goal. It’s currently working with suppliers such as avionics provider Honeywell, to test individual systems. “The VA-X1 is an important technical milestone for the UAM industry,” said Stephane Fymat, vice president and general manager of Urban Air Mobility and Unmanned Aerial Systems at Honeywell

VA-1X will have a more complex design that will feature numerous control surfaces and vectored thrust that’s likely to be more challenging to certify but may have more transport applications than an earlier design that employed no fewer than 12 overhead propellers in a multirotor configuration. Thrust vectoring is the ability of an aircraft to manipulate the direction of engine thrust to control its attitude or angular velocity.

The aircraft will have a range of up to 100 nautical miles and a maximum cruising speed of 150 miles per hour. Like Joby’s S4, the VA-1X will be certified to the same safety standards as commercial airliners, according to Vertical CEO Michael Cervenka. In addition, it will be optimized for longer-range flights to take advantage of the tiltrotor’s efficient cruise. The VA-1X is designed to connect entire regions, as well as flying shorter missions within metropolitan areas.

This original post was published on the Dassault Systèmes Blog : https://blogs.3ds.com/northamerica/the-race-to-market-for-urban-air-mobility/

REQUEST A QUOTE
TALK TO AN EXPERT