Cloud and industries: where do we stand?

All company departments are concerned by Cloud computing. One might think that the Cloud approach has largely entered into practice. Yet according to a survey by Club Décision DSI, in France, only 32% of IT decision-makers have opted for a Cloud first approach.

Only 32% of IT decision-makers have opted for the Cloud approach. This figure may seem low. The question arises: should we systematically adopt a Cloud approach? What are the business and business challenges of such an approach? To answer this question, it is necessary to go back to the definition of the Cloud. Here, we are talking about Cloud first, in other words, when an organization moves all its information systems (its skills, its software and hardware consumption model, its governance, or its project management) into the Cloud. This does not imply that the remaining 68% are not cloud users.

A company’s first reflex is often to want to act internally, with the “means at hand”. It should be noted that the cloud is not necessarily adapted to all applications. Indeed, each company must define its needs. For example, if a company already has in-house servers running 24 hours a day to store its data, then the Cloud may not be the right answer to its needs: “the Cloud is not meant to host. The Cloud is not meant to host,” as Servane Augier, Managing Director of 3DS OUTSCALE, points out. The real need that the Cloud can meet is rather that of agility, its main asset is to “be able to provide on-demand”. In this sense, all areas of activity are concerned, because they all have a peak load: either because of seasonal activities, or because their development requires high computing loads. Therefore, although 32% seems low, these figures will evolve over time, especially with the new generations of companies.

Start-ups and SMBs: Conversion to the Cloud Coming Soon

The motivations are not always the same, however, the advantages of the cloud are numerous. At Techno MAP, for example, the move to the cloud was driven by its own customers. Christophe Vergneault, CEO of Techno MAP, says: “We are at the service of our customers. We need to be completely integrated into the data they are going to make available to us in order to be able to interact on it. “The real-time data exchange with customers – from the automotive industry – was the decisive point for this change in software support. According to him, a collaborative platform such as 3DEXPERIENCE is the key to enabling this interactivity between his company’s businesses and its customers. It is a real time-saver, where each user is constantly in control of the data they are working on. Users can therefore maintain traceability of the various jobs. And this agility makes even more sense when the number of customers increases.

Aron Kapshitzer, Co-founder and CTO, 5th Dimension, is happy to confirm this observation. 5th Dimension has been designing eyewear for 3 years, integrating many complex technologies. Having suppliers on every continent, the question of information sharing obviously arises. The implementation of 3DEXPERIENCE was “exactly what we needed”. It enabled it to integrate all the different business areas: ideation, digital mock-up, evolution, integration of electronics, etc. In just a few hours “we have tools that cover all the company’s business activities. “. This is ideal for a startup that needs agility, speed, and above all no room for error.

Beyond a single platform, today several major trends are emerging around the subject of the Cloud and remain strong questions for some business leaders:

“Multi-cloud: which consists of relying on several Cloud services and several suppliers. In particular, this approach enables the use of targeted applications from different cloud providers. Since not all PaaS providers actually provide the same services and uses, some will be complementary;

“Edge computing: a technique enabling data to be processed at the edge of the network, rather than by transferring data to data centers as is currently possible with traditional Cloud computing. In particular, this process helps reduce electricity consumption;

“Serverless: this service is offered by a Cloud-managed service provider, and enables a developer to deposit code directly so that it can be executed on an infrastructure that can be consumed on demand. The service is managed: it is automatically distributed to resolve load or backup problems. This way, the customer no longer needs to worry about hardware or network problems, execution runtimes, or middleware requirements.

Did you say “trust”?

Then we come to an exciting question that animated this exchange: that of trust. If there’s one point on which our guests agree, it’s that of trustability, which is essential when choosing a cloud. Recently, the French government commissioned 3DS OUTSCALE, described as a cloud of hyper-confidence, to develop a sovereign cloud. This decision echoes the Andromeda project, an initiative of the French government in 2011, to create a real alternative to American suppliers, but which was a failure at the time. It was the recent extension of the Patriot Act, known as the Cloud Act, that came as an electroshock: today, an American administrative entity can retrieve data from an American cloud provider, regardless of where it is located.

In this context, sovereignty comes to secure our data. But there is also “a logic of digital independence and autonomy for France and Europe. “. So it is more than urgent to preserve an economic fabric capable of providing such a service from our territories.

The RIZE slicer has been custom designed from the ground up to generate tool paths for building parts fast without compromising strength. Users can import files in multiple formats, including stl, obj, 3mf, ply, vrml, and fbx or use the SOLIDWORKS plug-in to directly import a model from CAD. Intelligent slicing automatically identifies and handles problems in the imported file, such as incomplete surfaces or mismatching surface boundaries. A simple and intuitive interface lets users rotate, move and scale one or multiple parts on the build bed for printing with automatic support-structure generation. Use the default settings for reliable results or the advanced options to specialize output for unique situations. And, only RIZE ONETOUCH software includes markup features to apply text, graphics and 2D barcodes to parts.

Insert, orient and scale your part: 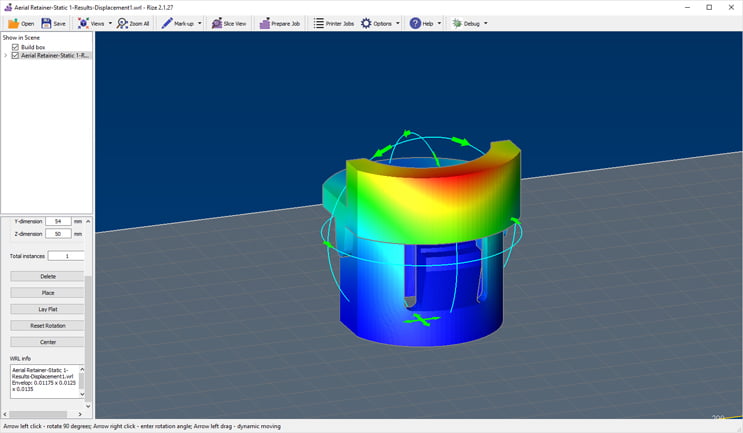 View your part from any angle: 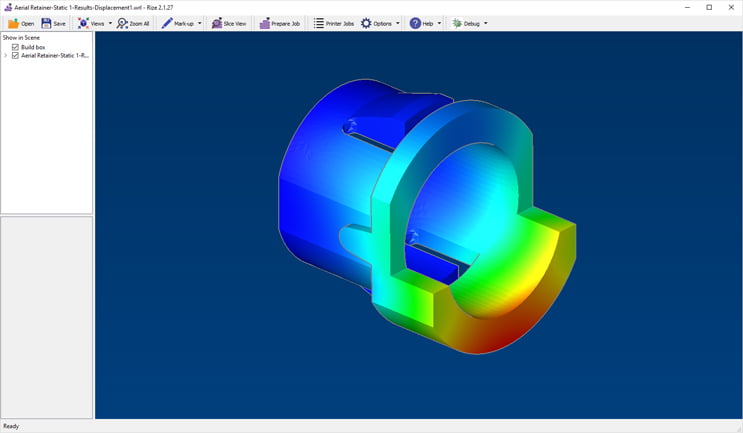 Automatically create the support structure for your part: 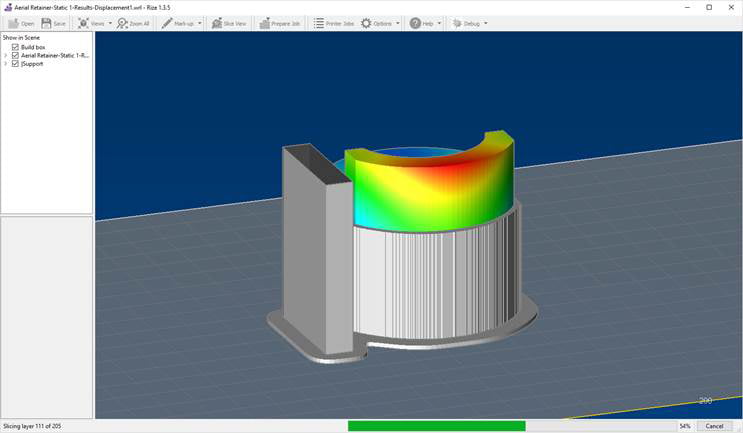 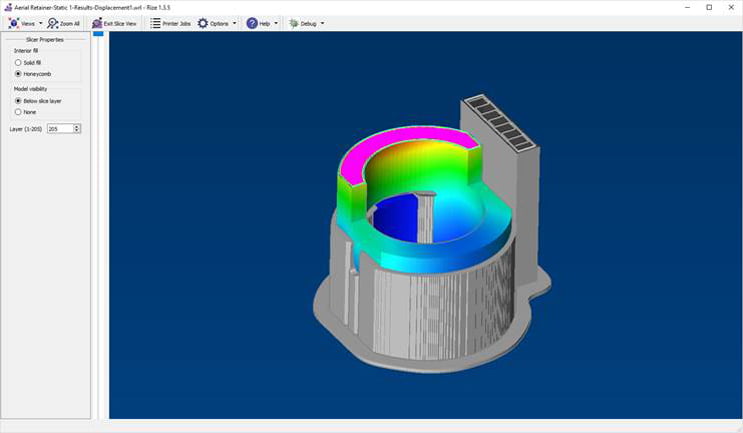 RIZE CONNECT enables users to remotely manage and monitor their RIZE ONE and XRIZE 3D printers from any location to improve production efficiency. Users can receive notifications, queue jobs and manage an enterprise print farm with an intuitive graphical user interface. Using RIZE CONNECT, users can also build greater security into their parts with digital part identification and other forms of part augmentation, such as QR codes and version control for part traceability, compliance and authenticity. 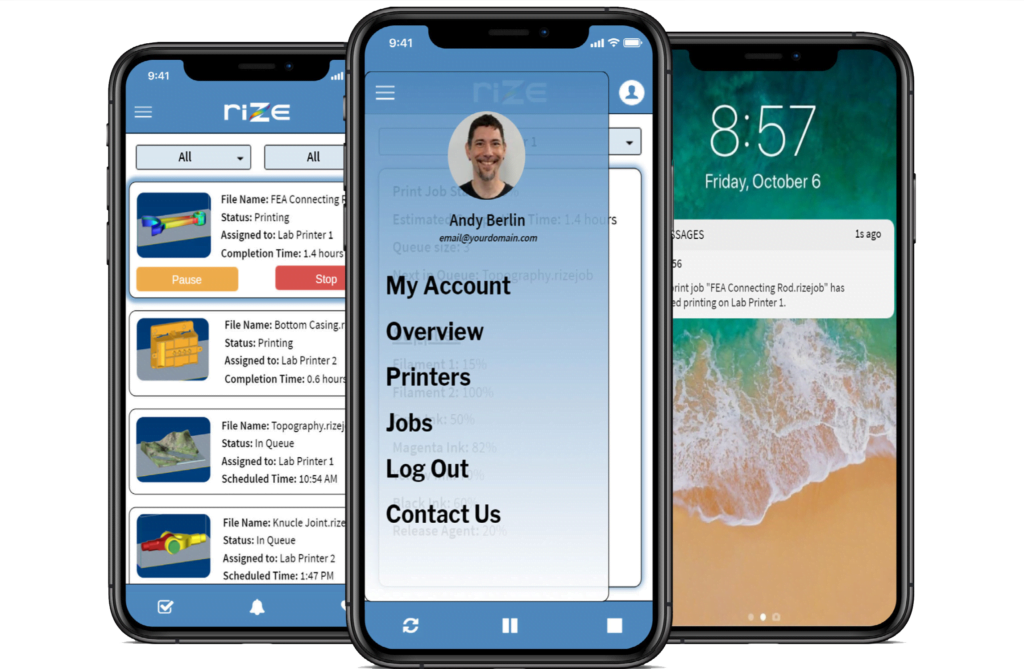